Dudley Do-Right's Ripsaw Falls is a log flume ride in Toon Lagoon at Islands of Adventure, a theme park adjacent to Universal Studios Florida. The ride is based off the cartoon character Dudley Do-Right. The ride, which is seven minutes long, features three drops, the last being 75 feet. The ride has won several awards.

The ride begins at the station by going up passing Snidely Whiplash ,our villain, and Dudley Do Right, our idiot protagonist, the ride winds around passing by several of Dudley Do Right's friends. the ride makes a small drop, then curves into another building. The building consists of Dudley Do Right lighting a match and encountering a bear

The ride passes the ceremony of Dudley capturing Snidley, which is the ending of the ride. 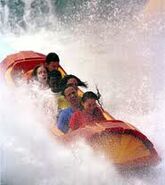 Manhood ruiner
Add a photo to this gallery
Retrieved from "https://universalstudiosparks.fandom.com/wiki/Dudley_Do-Right%27s_Ripsaw_Falls?oldid=4112"
Community content is available under CC-BY-SA unless otherwise noted.