The Wizarding World of Harry PotterEdit

The Wizarding World of Harry Potter is one of the seven themed islands located at Islands of Adventure. The area opened to the public on June 18, 2010, and is themed after Harry Potter, the popular, well-known, and magical film and book franchise.

Back in the late 1990s (the start of the worldwide sensation), the park had brought up ideas for a Harry Potter themed ride in the park. At the time, the film franchise was owned by Time Warner, who used it to open up an exhibit displaying the series in Australia. Two years later, the idea was scrapped.

In January 2007, a website had reported that the park's Lost Continent area would be closed and rethemed to one of the most popular children's series. In the next few days, rumors started building up saying that the area would have something to do with Harry Potter.

An internet blogger confirmed plans of the themed area in April 2007, which started to spread over the internet and in popular media. On May 31, 2007, Islands of Adventure announced its plans for The Wizarding World of Harry Potter.

In January 2008, the park started construction on The Wizarding World of Harry Potter.

Construction workers built a bridge connecting Lost Continent to Jurassic Park for guests to avoid the 20-acre construction site. The area's Flying Unicorn roller coaster was closed in July 2008, to begin its two-year transformation into Flight of the Hippogriff. The Enchanted Oak Tavern also closed at the time, and was demolished. In September, the entrance for the inverted dueling coaster Dueling Dragons had been moved next to Jurassic Park River Adventure to start construction of the land's Hogsmeade recreation. In October, the coaster's entrance was removed. The coaster also closed to begin its transformation.

In September 2009, about a year and a half about construction commenced, the replica castle of Hogwarts School of Witchcraft and Wizardry had been completed. At the same time, commercials and advertising went into start.

Construction on the whole land had finished on June 1, 2010, and soft openings went underway starting May 28.

The land had two grand opening ceremonies (June 16 and June 18). The first soft opening was for the Harry Potter cast, J.K. Rowling, park employees, and media representatives. The opening ceremony concluded with an orchestral performance and fireworks.

Dragon Challenge is a dueling inverted coaster, and the transformation of Lost Continent's Dueling Dragons ride. The attraction was renamed and dedicated to the task of dueling with a dragon, in the Triwizard Tournament of book 4. Both sides of the coaster have also been renamed, the Blue side being "Hungarian Horntail" and the Red side being "Chinese Fireball." The queue features many recognizable props from the films, such as the Goblet of Fire and the Triwizard Cup. Guests also get a view of the Flying Ford Anglia that Ron crashes into the Whomping Willow in book 2 and a replica of Hagrid's Hut.

Flight of the Hippogriff is the transformation of the Flying Unicorn ride. Guests are told that Rubeus Hagrid, the gamekeeper and Care of Magical Creatures teacher at Hogwarts, is teaching students how to ride hawk-like birds known as Hippogriffs by making them ride fake replicas he constructed. A replica of Hagrid's hut is in the queue, as well as a scene featuring Hagrid explaining to them how to approach a Hippogriff properly (the scene in book/film 3 where Draco Malfoy is attacked by Buckbeak).

Harry Potter and the Forbidden JourneyEdit

Inside the replica of the Hogwarts castle is Harry Potter and the Forbidden Journey. The attraction tours the grounds and the castle, including props and locations from the series. The ride also includes a speech from Headmaster Albus Dumbledore, and given directions from Harry Potter, Ronald Weasley, and Hermione Granger. Then, guests board a "magical bench", which utilizes the attraction's KUKA robot arm technology. The ride takes guests through a simulated flight as well as animatronic versions of the Whomping Willow (the giant tree that the Weasley's Ford Anglia crashes into in book 2), a pack of dementors (the creatures that attempt to kiss/kill Harry at the end of book 3), giant spiders (the creatures that run away from the basilisk in book 2), the Hungarian Horntail (the dragon breed mentioned in book 4), and a Quidditch game.

All of the shops/restaurants located in the area are in the land's replica of Hogsmeade, the village Hogwarts students begin to visit starting in book 3.

Ollivanders is a wand shop in the themed area. It is a recreation of the wand store that opened in 382 B.C. and is on Hogsmeade and Diagon Alley.

Like Ollivanders, the pub The Three Broomsticks, located on Diagon Alley, is a recreation of the restaurant. It also doubles as an inn, which Harry stays at after his midnight ride on the Knight Bus in book 3. The restaurant offers food and beverages seen in the movie like butterbeer, pumpkin juice, strawberry and peanut butter ice cream, chocolate cauldron cakes, and original British food (fish and chips, Shepherd's pie, etc.). Many references to ghosts and witches/wizards featured in the series are referenced in this inn.

The Hog's Head Inn, a pub on Diagon Alley, is a restaurant in The Wizarding World of Harry Potter. In the franchise, the inn/pub is owned by Albus Dumbledore's brother, Aberforth. It sells similar items like ones sold at The Three Broomsticks.

In book 3, Ron mentions to Harry and Hermione a sweet shop on Hogsmeade he'd like to visit called Honeydukes . Continuously throughout the book, Ron brings Harry sweets from the shop. The shop is replicated at the park section, and sells similar products sold at the store in the franchise like Chocolate Frogs (chocolate-covered frogs that come with a wizard card; first mentioned in book 1), Acid Pops, exploding bonbons, Cauldron Cakes, treacle fudge (given to Harry, Ron, Hermione, and Neville on the train ride to Hogwarts in book 3 by Remus Lupin), Fizzing Whizbees, Pepper Imps, and Bertie Bott's Every-Flavour Beans.

This store is a recreation of the widely-mentioned store on Diagon in the series. The store sells magical items, Quidditch supplies, Hogwarts memorabilia, etc.

In book 3, when Harry uses the Marauder's Map to run into Hogsmeade, he finds Ron in Honeydukes . Ron told Harry he'd been urging to take him to Zonko's, a joke shop on Hogsmeade. It sells toys and jokes themed after the series.

The store is named after Hogwarts caretaker Argus Filch and his mangy cat Mrs. Norris (who is petrified in book 2). It is a general store offering souvenirs, Hogwarts clothes, toys, and their on-ride photos. The shop is located at the exit to Harry Potter and the Forbidden Journey.

The replica of the Hogwarts castle, housing Harry Potter and the Forbidden Journey.

A concept photo displaying the entrance plaza and Hogwarts castle replica of the land. 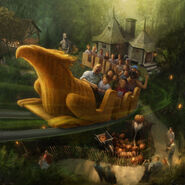 A concept photo for the mini coaster Flight of the Hippogriff.

A photo showing the area's recreation of the Hogsmeade sweet shop Honeydukes.

A picture of the Blue side (Hungarian Horntail) of Dragon Challenge.

The entrance sign to Ollivanders.
Add a photo to this gallery
Retrieved from "https://universalstudiosparks.fandom.com/wiki/The_Wizarding_World_of_Harry_Potter?oldid=4072"
Community content is available under CC-BY-SA unless otherwise noted.